The Czech foreign minister K. Schwarzenberg gave interview to The Times of Israel during his recent short visit in Israel. The interview is interesting for everyone, who is interested in Czech foreign policy towards the Middle East and Israel, its development and consistency. 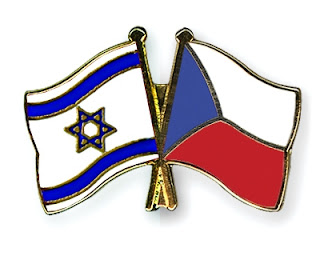 Israeli plans to build in the controversial E1 corridor beyond the Green Line are “obnoxious” and an unnecessary provocation, Czech Foreign Minister Karel Schwarzenberg said during a visit to Jerusalem, criticizing the government’s declared settlement policy in unusually harsh terms.

Israel considers Prague one of its closest allies in Europe, yet in a candid interview with The Times of Israel on Monday, Schwarzenberg espoused a series of foreign policy positions likely to deeply displease Jerusalem. He said, for instance, that he could never express support for Israeli airstrikes on weapon convoys in Syria, and “never, never, never” sanction a potential Israeli strike against Iran’s nuclear facilities — though he said he could evince “understanding” for such resorts to force.

Schwarzenberg, who is also the Czech Republic’s first deputy prime minister, called efforts promoted by Israel to label Hezbollah a terrorist organization nonsensical, useless and part of a “propaganda war.” And he backed demands within the European Union to label Israeli products made in East Jerusalem and the West Bank as having originated in the “Occupied Palestinian Territories.”

An Israeli Foreign Ministry spokesman said the Czechs were good enough friends that Israel would see the criticism as constructive.

“To be honest, with the settlements in the last time even we have problems,” Schwarzenberg told The Times of Israel in the interview, held at the King David Hotel just before he headed back to Prague after a short visit. “Especially when the government declared they would start to build in one certain area” — E1 — “which is the only connection between Jerusalem and the Palestinian territories.”

Last December, as a declared punitive measure for the Palestinians’ successful bid to upgrade their status at the UN to nonmember observer state, Israel announced plans to develop the sensitive E1 area east of Jerusalem. E1 is located between the Maaleh Adumim settlement and the capital, and many in the international community believe Israeli building there would drive a problematic wedge between the northern and southern flanks of the West Bank and thus render a contiguous Palestinian sovereign entity in the West Bank nearly impossible. Numerous countries, notably including the US, sharply criticized the construction plans. The Israeli ambassadors in Britain, Brazil, France, Spain, Sweden, Finland, Ireland, Denmark, Italy, Egypt and the EU were summoned for sharp dressing-downs.

For Schwarzenberg, the near-universal condemnation was a matter “of course,” since “the international community requests a two-state solution, and the Palestinian side will never agree without having their part of Jerusalem.”

“Building on E1 would be obnoxious for Israel itself,” Schwarzenberg added. “One shouldn’t do things unnecessary just to provoke everybody around, which sometimes is a strong temptation. I succumb to that temptation sometimes too myself, I admit it. But I hope the fathers of the State of Israel would be wise enough not to do it.”

Prague adheres to the EU-wide policy that recognizes Israel in its pre-1967 lines but considers territories beyond the Green Line to be “occupied,” Schwarzenberg reiterated.

On Tuesday morning, Israeli media reported that Netanyahu had de-facto frozen new construction in the West Bank amid a renewed US-led push to resume peace talks. In recent months, Jerusalem has increasingly regarded the Czech Republic as Europe’s Canada, the one country that stood with the Israeli government through thick and thin, supporting even policies and positions unpopular with the rest of the world.

Prague was the only European nation that voted against the Palestinians’ UN upgrade last year, with Italy and France voting in favor and Germany, Great Britain and the Netherlands abstaining.
After the November 29 vote, Prime Minister Benjamin Netanyahu promptly called his Czech counterpart, Petr Nečas, and thanked him for Prague’s “courageous” stance. “History has shown us time and again that what is right is not what is popular, and if there is a people in the world who can appreciate that, it’s the people of your country,” Netanyahu told Nečas a few days later in Prague.

“The Czech Republic stands out as one of Israel’s best European friends,” confirmed Efraim Inbar, the director of Bar-Ilan University’s Begin-Sadat Center for Strategic Studies, in a paper entitled “Israel Is Not Isolated” published in March.

In the interview, Schwarzenberg, who has been foreign minister since 2010 (after a first term from 2007 until 2009), confirmed his government’s staunch friendship with Israel. Yet he made clear that Prague was by no means willing to agree with Israel on everything.

For instance, Schwarzenberg refused to publicly back Jerusalem over two airstrikes the Israeli Air Force reportedly carried out in Syria over the weekend to prevent Iranian-produced Fateh-110 missiles from falling into the hands of Hezbollah.

“You can never, as a responsible minister of foreign affairs, support what’s done against international law. And to attack [targets on foreign territory], you can never support it, as I have never supported, let’s say, American airstrikes in Pakistan,” Schwarzenberg said. “But I perfectly understand those who do it.”

The Czech minister took a similar approach regarding a potential Israeli strike against Iran’s nuclear facilities: Prague might appreciate why Jerusalem would do it, but it cannot officially sanction it. “Because to make an aggression, attack a country — you should never, never, never support it. But you can understand it,” he said in English.

He himself has occasionally done “things which I knew are not according to the law,” Schwarzenberg admitted, adding that after checking his conscience he nonetheless considered them to have been the right course of action. “But that’s not to establish as a principle that I would say such deeds are okay.”

Every government has to take responsibility for its actions; no other nation, especially one that isn’t directly involved, is entitled to approve actions that contradict international law, he said.

It is a mistake to call the current government in Tehran genocidal, the 75-year-old Prague native added. “For the moment, they didn’t commit any genocide. Let’s be careful with this expression. I know what the Shoah was. I’m an old man, I know what it was,” he said. “For the moment, the Iranian regime has done lots of mischief in the world, [including] executing people, but it didn’t commit any genocide.”

But does Israel have the right to ensure Tehran won’t even get the chance to think about wiping Israel off the map? “That’s where the problems start,” Schwarzenberg replied, adding that any decision about a military intervention is up to the conscience of the Israeli government.
Israeli Foreign Ministry spokesperson Yigal Palmor declined to respond to Schwarzenberg point by point, but said the criticisms were well intentioned, indicating they would not damage ties.

“We love our Czech friends very dearly. And we have always appreciated their great qualities, such as courage, honesty and good sense of humor,” Palmor said. “We believe that the Czechs are such true good friends that they have earned the right to speak their mind even if we happen to disagree with them. A friend in need is not just a friend indeed, but is a friend whose words are always appreciated, be they in praise or in criticism.”

Labeling Hezbollah a terrorist group? ‘That belongs to the propaganda war’

Schwarzenberg dismissed efforts to pressure the EU into designating Hezbollah a terrorist organization as unpractical and meaningless.

“This is a real problem because Hezbollah on one side is a military organization, which does quite a lot of mischief, be it… on the Israeli frontier, be it now in Syria,” he said. “On the other hand, it is in a theoretically sovereign state recognized as political party.”

The fact that Hezbollah officials are members of the Lebanese government further complicates matters, he explained. “What should my ambassador do when he is in Beirut and he comes to a reception? Say ‘No minister, you’re a terrorist, I don’t speak to you’? This labeling makes not a lot of sense. It belongs to the propaganda war.”

As long as Hezbollah is recognized in Lebanon as a legitimate party, it is difficult for other countries to label it as a terrorist organization, Schwarzenberg opined. “The facts are one thing, but their legal status is another thing.”

Israel, the US, the UK, the Netherlands and Bahrain, among others, have added the Shiite group to their lists of terrorist organizations, but the EU has so far refused to do so.

Since a Bulgarian police investigation earlier this year blamed Hezbollah for a July 18, 2012, terrorist attack in Burgas that killed five Israelis and a Bulgarian, calls have grown louder for the EU to rethink its stance, yet doing so requires unanimity among the 27 member states. Officially labeling Hezbollah a terrorist entity would significantly hamper the organization’s ability to operate.

“One can have different views on what is the best solution,” Schwarzenberg said about individual EU states having blacklisted Hezbollah. “I have my doubts about it, if the step is useful.”

However, the EU would surely recognize Hezbollah as a terrorist organization if the Shiite group continued to carry out attacks on European soil, he said.

The EU may also be moving toward enacting guidelines that would require retailers to label Israeli goods produced beyond the pre-1967 lines as not originating in Israel. Several EU states, including the UK and the Netherlands, have declared their support for such measures; the South African government introduced similar steps recently.

While Schwarzenberg said the issue is not currently discussed in his country, he is principally in favor: “I think it is a legitimate request.”

Israel vehemently opposes any efforts to impose labeling requirements for settlement goods, arguing that such policies are discriminatory in that they single out Israel while ignoring territorial disputes elsewhere.

"In other parts of the world they don’t have occupied territories,” Schwarzenberg replied.

After a long battle, Pretoria gave in to demands of the local Jewish community and agreed that these labels would designate products as coming from “Israeli settlements” in either East Jerusalem or the West Bank, as opposed to mentioning the words “Palestinian” or “occupation.”

Schwarzenberg, on the other hand, suggested that such labels indicate products come from the “Occupied Palestinian Territories,” because “that’s the internationally recognized [term].” He urged, “Call it what it is. Always tell the truth, it’s the best policy.”
Vystavil Marek Čejka v 11:26