Tom Segev about the assassination of Reinhard Heydrich 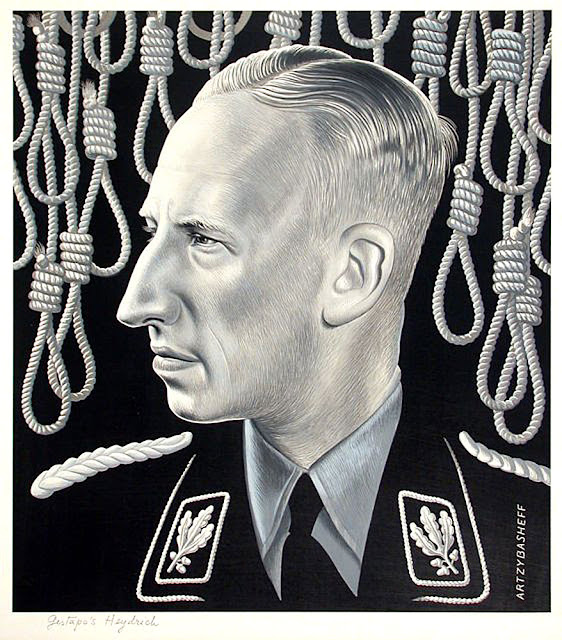 The most prominent current Israeli historian writes about assassination of the one of the most important man in Nazi Germany seventy years ago.

Reinhard Heydrich, one of the architects of the Holocaust, loved his open car, a Mercedes 320, and was not careful about complying with security rules. The car bore the license plate SS-3, and during his stay in Prague, Heydrich traversed the same route nearly every day.
Generally, only his driver was with him. On the morning of May 27, 1942, Heydrich was driving through one of Prague's northern residential districts. The car came to a sharp turn and, as usual, slowed down. An assassin who had been lying in wait for Heydrich opened fire on the car; a second person tossed a hand grenade into it. Heydrich was wounded, but managed to get himself out of the vehicle and return fire. Afterward he collapsed. He was taken to a hospital and died from his injuries a few days later.
This month marks the 70th anniversary of that incident, and as happens every decade, a debate has been reignited in Prague. The state sees the assassination as a heroic act, whereas quite a few Czechs view it as a terrible mistake.
Heydrich was one of the heads of the domestic security system in Nazi Germany. In 1941 he was appointed acting Reichsprotektor of Bohemia and Moravia, as the remnants of occupied Czechoslovakia were called. De facto, he was the governor. He was well known, close to the heads of the Nazi regime and therefore a target for assassination by its enemies.
The decision to liquidate him was made in London, where a Czechoslovak government-in-exile sat, headed by Edvard Benes. The assassins, Jan Kubis and Jozef Gabcik, underwent special training for what was code-named Operation Anthropoid, and parachuted from a plane that specifically flew them in from Britain. After the murder they hid in one of the churches in Prague, but were discovered. One of them was killed in a shootout with the Germans and the other shot himself. Today they are, by and large, considered national heroes.

Current scholarship ties the decision to assassinate Heydrich with a need to improve the Czech government-in-exile's image in the eyes of the British, and to boost patriotic morale back home. Up to that point, the operations against the Nazis had not been a great success. Before they decided to take out Heydrich, Benes and his people debated whether it was worth risking an operation like this, because they knew the Germans' vengeance would be horrific. And so it was: The Germans killed more than 1,000 civilians, including many of the inhabitants of Lidice, a village located 20 kilometers northwest of Prague. All of the men and many of the women were shot on the spot; other women were sent to death camps. Lidice became one of the symbols of the crimes the Nazis committed in Europe.
Heydrich's murder did in fact improve the prestige of the exiled Benes government, but it was of no real benefit. The war carried on, and so did the extermination of the Jews. The only real way to save Europe was to defeat the Third Reich.
Heydrich's murder bequeathed to Czechoslovakia a myth of heroism, but also of treason. The perpetrators of the murder were discovered in their hiding place because someone squealed on them. The communists ascribed the heroism of the assassins to themselves. But in the land of the "Good Soldier Svejk," there were many who disavowed Heydrich's murder and to this day still repudiate the official ceremonies that glorify the bravery of the assassins. It was an unnecessary and harmful act, they say.
Among the events planned to mark the 70th anniversary are an exhibition at the Knesset that will deal, among other things, with the Terezin (Theresienstadt) concentration camp in what is now the Czech Republic, and a performance of Verdi's "Requiem" in Jerusalem. The Terezin inmates were forced to perform the "Requiem" to camouflage the murderous goings-on in the camp, which was commonly described as a "ghetto."
Thus, Heydrich's name is being made to serve as a link of sorts between Lidice and Terezin. But this is a fairly artificial attempt to invent a Jewish context for his murder. In any case, apparently there was not even a single inmate in Terezin whose life was saved thanks to the murder of this man.