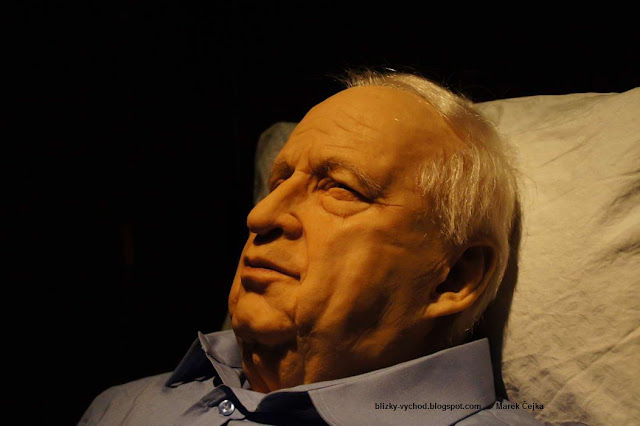 The thin line between art and political activism is being blurred by an exhibition portraying the Israeli-Palestinian conflict from the point of view of those who have experienced it firsthand and also from the more distant European perspective.

While some choose cultural boycott to express their disapproval of the current politics of Israel or Palestine, the curators of "Middle East Europe" at DOX are engaging both sides of the story, allowing Israeli, Palestinian and European artists to communicate their sometimes critical opinions through art. The exhibition does not take sides, but shows that the Israeli-Palestinian conflict has parallels among cultures in Central Europe. According to co-curator Zuzana Štefková, the Middle East and Central Europe communicate with each other through both politics and art.

"We must realize the regions are not separated in this sense. Not only because Czechoslovakia exported guns to Israel and participated in what is happening there, but also the anti-Semitism before World War II sent a huge wave of immigration into Israel," Štefková says.

The connection between seemingly remote areas is also expressed through guilt, according to Štefková, who cites the famous quotation by Prague-born Jewish novelist Franz Kafka, "Guilt is never to be doubted," which appears at the beginning of the exhibition.

Besides contrasting the viewpoints of Europeans and Middle Easterners, the exhibition provides more subtle insights than what is typically available in the mainstream media, where the Israeli-Palestinian conflict is often simplified and in some cases biased. Showing a mixture of personal dramas and fears provides unique testimonies that give visitors an approximation of real-life experience.

Issues of terrorism and political activism have culminated in attempts by some artists to suggest possible solutions to the conflict, whereas others attempt to deal with the situation with the help of humor.

"This is the first compact exhibition in 20 years in this country that dares to touch on such an explosive issue," says one featured artist, Czech poet and performer Milan Kozelka, whose portrayal of Roma from north Bohemia in a style reminiscent of Palestinian freedom fighters is one of the clearest links between the Middle East and Europe.

One of the most evocative pieces on display is an installation by Swiss artist Christoph Draeger, whose video installation recreates the horrors of the crime scene at the Olympic village in Munich in 1972, when terrorists murdered members of the Israeli team. Draeger felt the need for a more analytical point of view to contrast what he sees as the sensationalist and in some cases moralizing angle many take to the Munich massacre.

"On the Munich anniversary, I flipped through all the papers, and found some articles on page 15, saying, 'Oh, by the way, it has been 30 years since the massacre,' " Draeger says, citing his inspiration for the installation.

Another provocative installation is Noam Braslavsky's life-size statue of former Israeli Prime Minister Ariel Sharon, which is being exhibited outside of Israel for the first time and draws attention to what the artist sees as the political stagnation in Israel. The sculpture has drawn criticism, especially from members of Knesset, the Israeli parliament, who claim it is not art.

"Once Sharon fell into a coma, he got out of sight a little bit, but my installation is to provoke emotional reactions. He influenced the lives of many. This statue was for everyone - not only Jews. It was amazing for me to see people's response. I do not want to glorify a political leader, but I am attempting to remind viewers of him," Braslavsky says.

Czech political scientist and Middle East expert Marek Čejka welcomes the exhibition as a unique attempt to shatter the myths around the conflict.

"To the average Czech, Palestinians are a half-educated people, and every other one of them is considered a hidden terrorist with a scarf on their heads. This exhibition could break this prejudice. If you come, be open to new opinions and take time to think about the controversy," Čejka says.

Curator Tamara Moyzes, who left Israel at 18 for an exchange program during her studies at the Czech Academy of Fine Arts and became an artistic activist, shooting dozens of documentaries on the occupied territories, says she is satisfied with the response the exhibition has received so far.

"I received complaints from both the Israeli Embassy and the ISM [Palestinian-led International Solidarity Movement] who disapproved of my stance on the cultural boycott, and I told myself this is just how it's supposed to be," she says. "The exhibition served its purpose: Both sides voiced their criticism."
Original article here.
Vystavil Marek Čejka v 11:14